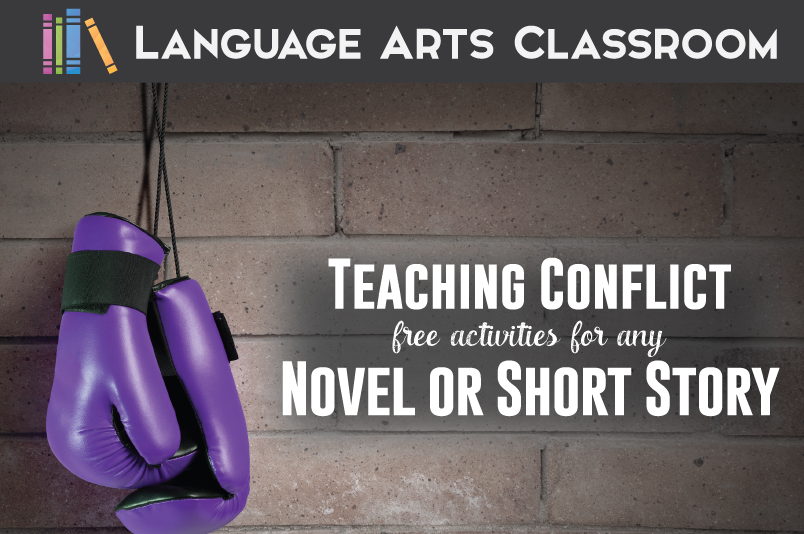 Conflicts in literature. They give our stories movement. Identifying examples for different types – man vs. man, self, nature, society, and the supernatural – is the focus of many class discussions.

You want to differentiate, and not only discuss a novel’s conflicts. Over the years, I’ve honed several conflict activities that are easy to implement, and switch around. Plus, they work well for review.

Here is a list of free, no (or little!) prep conflict activities. Some may fit better with novels and others better with short stories. Adapt as needed!

Sticky notes to the rescue.

Give every student one or two sticky notes. Have them write one conflict per note. Organize different sections around the room – man vs. man, society, and on – and have students file their sticky notes in the appropriate area.

Students can see what the most common conflict was – and what the most common type of conflict was. Organizing the conflicts will give students a visual, and you can ask them to explain why some readers see the same conflict, but put them in different categories. You can also analyze which category has the most – is this indicative of the story’s time period? the author’s life experiences?

Choose one type of conflict to look at throughout history. (This works well for man vs. government). Students will throw down wars, prohibition, witch trials, voting rights, and segregation). Create a master list from students’ ideas.

Are any remnants of this history seen in the current story? Probably so. Turn that realization into a speech, paper, or additional research.

Brainstorm ideas about a particular conflict.

Choose a conflict, or have students pick a conflict for further study. Have students decide which character (or force) from the story is ‘correct.’

Look at dissenting sides together – possibly moving students on different sides of the room. Then ask students to write about the opposite of the ‘correct’ character they originally chose. (Bonus: discuss empathy).

Not a conflict? Are you sure?

Reread earlier portions of the story, not only to review, but to find seemingly innocuous events between characters and forces that we now know have conflicts. Read these events with a fresh set of eyes.

This works well with longer novels or plays. When students first read a story, they naturally don’t catch details that add to conflicts.

Take A Separate Peace for example. When readers first meet Phineas and Gene, they might not notice the subtle expressions from Gene. This initial stage of their conflict leads to the story’s climax and ultimately Gene’s realization that there never was an enemy. Students will see that the conflict was always there, before they knew it was.

List conflicts in the story. What happens if a conflict were to disappear – big or small. How would the story change? Would readers understand a character less? Would the story be less interesting? Was the conflict unnecessary? (Are you sure?) Could it have been more interesting? Involved another character? Connected to the theme?

By asking these questions after taking a conflict away, students will realize how that conflict shaped other pieces of the story and moved the story along. And if it didn’t – well, that is a huge activity on its own.

Conflict activities may need specifically tailored for individual stories, and I hope these give you a starting point. For when you need a quick activity to study a novel or short story’s conflicts, I hope this list gets you started.

Looking for extra, ready to print and teach materials to teach conflict? This Conflict Graphic Organizer Bundle will work work with any novel or short story.