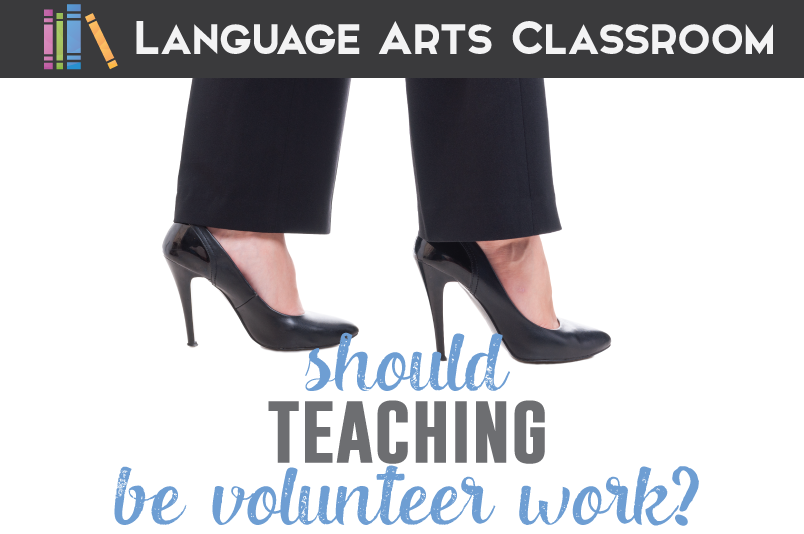 As education in America began, teachers were male. This changed though. Goldstein explains that education advocates like Catharine Beecher and Horace Mann touted women teachers as bargains and morally beneficial:

[In Mann’s] eleventh annual report as secretary of education, he noted that replacing male teachers with women had saved the state $11,000, which was “double the expense of the tree State Normal Schools.” Hence – a bargain for taxpayers! Mann depicted these cost-effective female educators as angelic public servants motivated by Christian faith; wholly unselfish, self abnegating, and morally pure.

Not only were female teachers inexpensive, but teaching was their true calling:

…her natural, God-given talents as a nurturer, whether or not she had biological children of her own.

Teachers are female who volunteer their time with children because they are an extension of mothers; female teachers are missionaries.

That’s why I believe educators should read The Teacher Wars: education’s history provides clues for the public’s beliefs about education today.

This history has dragged two lasting impressions into the present:

So lets break those down.

The pejorative concept of lazy teachers teaching for 6 hours (reading the newspaper in a luxurious teacher’s lounge during prep), buddying up with students, leaving at 3:00 pm, and sitting poolside all summer is going wayside. Politicians may not utter the catchphrase “lazy teachers,” but the term hangs in the public’s eyes, consciously or not. Teachers know that they fight this concept. So when teachers lobby for better pay and benefits, they do know that a large part of the public is against them because of an outdated political maneuvering – this picture of a politician slashing away at lazy teachers’ wages.

In reality, teachers are not paid enough money for the work they complete, the value that they add to children’s lives. What teachers add to the world may not be seen immediately, and I’d argue that is why citizens take personal offense at teachers’ raises but pay a hundred dollars for a purse or hundreds of dollars for a sports or concert ticket. Teachers aren’t flashy and the work doesn’t provide immediate gratification.

I’m even willing to say that the pay teachers receive for the time they are at work is fair, or at least headed in the direction of fair – if that was the only time they spent working. That’s rarely true as most teachers work long into the night, on weekends, and all summer.  (Note: It seems that teachers are willing not to be paid their full worth in exchange for bettering society and helping children. My use of ‘fair’ reflects that – and could be an entirely different blog post, or book). Pay based on a forty-hour work week, leaving at the end of the day and not working one second into the summer could be fair. That never happens though and so teachers are still volunteering their time today, like two hundred years ago.

So the history of teachers is that they are inexpensive because as public education began, teachers were primarily female. The time period said that women were not equal to men, and that was reflected in their pay. I’d add that since children at that time period were expendable, that teachers cared for children played a role in the low pay as well.

Unfair treatment of females and children, combined with the public’s idea of overpaid teachers and its reluctance to invest in longterm gratification, plus the relic-like notion of teachers as missionaries, or volunteers in the classroom, can explain teachers’ shameful wages today.

Additionally, history shows that teachers were an extension of parents. This also plays into the public’s view of teachers today.

Because teachers care for children, does that make them an extension of parents? This is more of a statement with less wonderment. Teachers will care for students, and they do. Most people wouldn’t argue that teachers should abandon a caring and nurturing role. Perhaps this role has changed from one of parental roots to one with a psychological base as science improves. Teachers hopefully model their care of students with scientific guidelines in mind – and parents do this as well. The caring aspect has changed, but the belief that teachers are parental perhaps has not.

The two ideas are connected, in that caring for children is volunteer work, and therefore taxpayers can pay teachers a pittance and they will be happy. They are volunteering, after all.

It’s interesting because teachers must acknowledge that they are volunteering their time. If teachers are paid for a forty hour work week, their other work hours are volunteer hours. Do teachers find this acceptable?

Our history shows that teachers are volunteers part of the time. Should this change? Will acknowledging our history work toward a change, or reinforce the missionary belief?

I expect some people to say that teachers are volunteers; teaching by nature and from its history should be missionary work. Other people will argue that teaching’s demands of knowledge and professionalism should require better pay.

Where do you stand in this continuum: teachers are volunteers – to the other end – teachers should be paid for the hours worked – even if that means working fewer hours?

Hopefully by looking at public education’s beginnings in America, we teachers can see why we face struggles in our attempts to grow.